National Societies take all necessary steps to protect and promote the organization’s visual identity and that of its staff and volunteers.

To reduce the risks faced by a National Society when carrying out its humanitarian work in sensitive and insecure contexts and to increase its acceptance and access, it is crucial that its staff and volunteers, as well as its vehicles and buildings, be clearly identified and easily distinguished from others.

Internal guidelines on the proper display of the emblem and of the National Society’s logo and visual identity are an essential tool. When applied consistently, such guidelines will reinforce recognition of the National Society within the community and by armed and security forces, as well as by other key stakeholders, which in turn will enhance its safety and access. National Societies may seek to further strengthen their distinct visual identity through other means, such as wearing distinct uniforms.

The internal guidelines should include a section defining the conditions of display of the emblem and of the National Society’s logo in the context of the Society’s partnerships with external actors.

Should instances of misuse of the emblem(s) be observed, whether in peacetime or in armed conflict, the National Society should act immediately  in support of the public authorities to stop the abuses and restore respect for the emblem or emblems. Taking such measures has long been recognized as part of a National Society’s auxiliary role to the public authorities in the humanitarian field.

One of the key factors contributing to a National Society’s safe access in sensitive and insecure contexts, including armed conflict and internal disturbances and tensions, is the clear and distinct identification of its staff and volunteers, buildings, vehicles and other property. 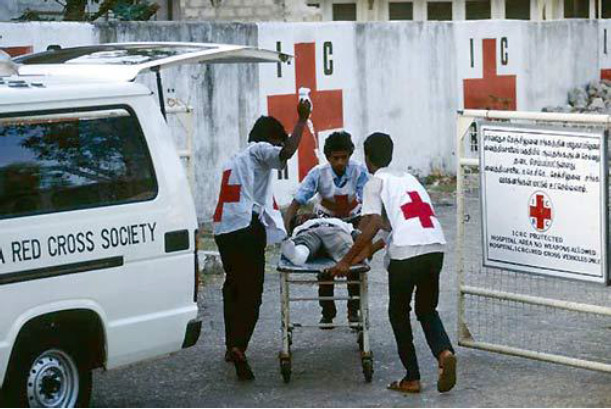 entification may take different forms. These include: the marking of persons and objects with the distinctive emblems of the 1949 Geneva Conventions and their Additional Protocols or with the National Society’s logo; the wearing of uniforms; the carrying of identity cards; and the use of distinctive radio or electronic signals.

Although each component of the International Red Cross and Red Crescent Movement (the Movement) operates autonomously and conducts its humanitarian services in its own name, we are all united by the Fundamental Principles, by our shared commitment to the Statutes of the Movement and its agreed policies and rules, and by our common use of the distinctive emblem. The world often views us as one organization, and the actions of one Movement component can have a direct impact on the reputation and security of another.

As part of the Red Cross and Red Crescent “family”, we have a visual identity that is inherently linked with how we carry out, and communicate about, our humanitarian activities at the individual, collective and organizational level.

Knowledge and understanding of the emblems

The red cross and red crescent emblems are among the most recognized, respected and trusted symbols in the world.

First and foremost, they are the visible signs of the protection afforded to armed forces medical services and authorized civilian medical services in times of armed conflict. They are also the symbols of the neutral, impartial and independent humanitarian action carried out by the Movement and its respective components.

The respect associated with the emblems is today undeniable, and the identity of the components of the Movement is inseparable from them.

Improper or unauthorized use of the red cross or red crescent emblems in peacetime or in other situations can seriously undermine the image, reputation and acceptance of the National Society and of other Movement components. This is the case in particular for National Societies working in sensitive or insecure contexts.
Misuse of the emblems or of the logos of Movement components may blur our identity and distinctiveness. Being confused with others, whether it is with the public authorities, the armed forces or with external organizations which may not be working in a neutral, impartial or independent manner, can have serious repercussions on the safety of personnel and can jeopardize our safety and access to beneficiaries.

Did you know?
Who is entitled to use the protective emblem?

In times of armed conflict

In times of peace

The ICRC and the International Federation may use the emblems at all times (in peacetime as well as in times of armed conflict) and without restriction.

Did you know?
What are common forms of misuse of the emblems?

To promote the correct use of the emblem, it is essential that there be a national law regulating the use and protection of the emblem in all situations, including in peacetime. Such a law will also serve as a reference for the National Society to guide its use of the emblem, and as a basis on which to develop a strategy to ensure respect for the emblem and to protect it from misuse by others.

National Societies have a particular responsibility and role under the Statutes of the Movement to support their public authorities in their obligation to ensure that the emblem, as well as the National Society’s own logo and name, are known and respected at all times.

In addition to our responsibility to display the emblem and our respective logos correctly and consistently, it is important to ensure they provide the distinctiveness and visibility required.
A National Society’s means of visual identification displayed on its personnel’s uniforms and other items of clothing, buildings, transports and other assets must elicit an automatic association with the Society’s purely humanitarian mission and mandate, an understanding that the services are provided impartially to all those in need, and that the providers are neutral, independent, and do not take part in the violence.

The display of the emblem is only the external or visual expression of the protection that is due to protected persons and objects under international humanitarian law (IHL): the staff and volunteers of a National Society duly authorized to display the protective emblem in accordance with IHL are protected irrespective of whether or not they are displaying the emblem.

However, National Societies may consider the use of consistent supplementary means of identification to reinforce their distinctive identity. This in turn will contribute to safer access of their staff and volunteers. See examples below.

The National Society may also resort to other means of identification for the purpose of increasing its distinctiveness and safer access. These might include: 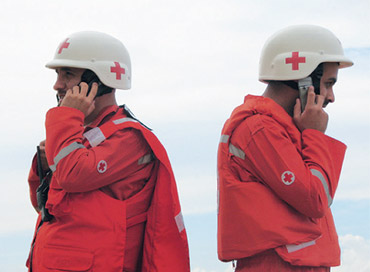 Displaying a large logo may, in certain circumstances, enhance the visibility and distinctiveness of the National Society and contribute to its ability to carry out life-saving humanitarian activities. This practice should, however, only be resorted to with restraint as it may create confusion with the protective emblem. It also does not conform strictly to the letter of the Conventions and is not fully covered by the 1991 Emblem Regulations.

It would therefore seem necessary for each State to determine, with its National Society, whether such a practice is permissible in the national context and, at a minimum, such use must not be prohibited by national legislation.

Rules on the joint display of visual identification with partners

Also of importance is the need to carefully consider the joint display of visual identification when engaging in partnerships. Such display should remain exceptional and discreet and should not create any confusion. When partnering visibly with another organization, you assume their identity to a certain extent, and therefore must be concerned with their reputation and whether or not they share our values and principled approach to the provision of services.

Internal regulations or identification guidelines and enforcement systems are useful to guide the consistent and correct use of the emblem within the National Society, such as the display of the logo on clothing, personal identification documents (with photo and expiry date), products, premises, equipment and means of transport. When applied, these measures will reinforce a common recognizable image of the National Society, thereby increasing its acceptance, security and access.

A National Society should also designate a focal point or department entrusted with advising it on the display of the emblem and its logo in all of its activities, including in its partnerships with external actors.

The extent to which the emblem and the National Society logo and name are misused in the country needs to be monitored and active support provided to the public authorities so that they are able to fulfil their legal responsibilities to establish and implement effective rules and procedures to enforce protection. (See also II. Legal and policy base)

5.2 Knowledge and understanding of the emblems

Knowledge of the emblems, their respective functions and the conditions of their display is promoted among key stakeholders, including armed forces and groups, among medical professionals and more broadly within the community.

Measures have been undertaken to ensure that the National Society’s visual identity is distinct from that of the armed actors and of their medical services. (See also II. Legal and policy base)

5.4 Internal guidelines and systems on the use of the emblem(s) and logo

Internal National Society guidelines and systems have been established and implemented to support the consistent and correct use of the emblem and of the National Society’s logo on clothing, personal identification documents, products, premises, equipment and means of transport.

Visual identification practices (high vs low visibility) that comply with Movement regulations and enhance acceptance, security and access have also been adopted. Consideration should be given to the implementation of a control system such as serial numbers that tracks work clothing and identification in order to prevent its misuse by non-Movement entities.

5.5 Rules on the joint display of visual identification with partners

In conformity with established mechanisms to guide the formation of partnerships (see 3.8), any joint display of visual identification should remain exceptional and discreet and should not create confusion. Such considerations are paramount in sensitive and insecure contexts.